In this ​blog post, you will learn why five-year cancer survival rates are bogus and ​why early detection doesn't prevent cancer deaths.

Cancer survival rates often use a five-year measurement. ​It is often cited in cancer statistics. But statistics often mean little in the real world of cancer patients. Five-year survival stats do not discern between disease-free survival and those alive with disease.

A woman can get a breast cancer diagnosis. If she is alive five years later, she is a successful survivor, even if she still has cancer or not. ​It doesn't matter if she is bedridden, unable to feed herself, or on life support. 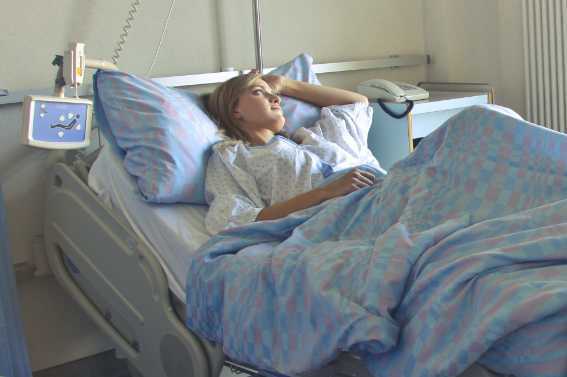 ​If a cancer patient has cancer after five years, she is still considered a successful cancer survivor

If she dies five years and one month after diagnosis, she is still a success. Let's say she dies from any side effects of cancer treatments.

She can have a surgical complication, a drug reaction, chemo toxicity, or organ failure. If she didn't technically die from cancer, she might not be part of the statistics.

How To Fake Five-Year ​Survival Rates ​With Lead-Time ​Bias

Imagine a group of patients get a cancer diagnosis at age 67 because of some symptoms. Three years later, they all die at age 70. Each patient survived only three years; so, the five-year survival for this group was 0%. 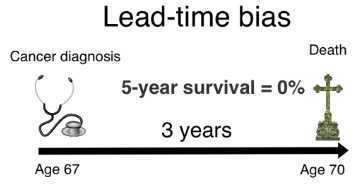 ​​If a late-stage cancer patient dies within five years, the survival rate is 0%

Now, imagine that everyone undergoes a cancer screening. Screenings may lead to an earlier diagnosis. Let's say that the screening catches cancer in all patients at age 60. But, at age 70, they still die.

In this scenario, each patient survived for ten years. So, the five-year survival rate for this group is now 100%. Survival just went from zero to 100%.

​​If an early-stage cancer patient survives for ten years, the five-year survival ​rate is 100%

With this new screening test, cancer patients now appear to live three times longer. Ten years instead of three. But what happened is that each got treated as a cancer patient for seven plus years.

​​If you diagnose people early, you can fake the five-year survival rate even if both patients die at the same age

The other trick the industry uses to mislead us is through overdiagnosis bias. This is how it works.

But, let's say, they overdiagnose 2000 more people with cancers that would have never caused a problem. Or would have disappeared on their own. Since the cancer was harmless, they should live five years later if treatments didn't kill them.

So let's say all 2000 people with non-threatening cancers survive five years. If you add those with severe cancers, you should have 2400 survivors out of 3000. That’s an 80% five-year survival rate.

​​The more people you diagnose with early-stage cancer, the better the five-year survival rate becomes

In this way, you have doubled the five-year survival rate even if the same number of people died from cancer. Many cancer patients are not living longer due to improved cancer treatments. They are just finding out sooner that they have cancer, thanks to early detection.

Early-stage cancers are not life-threatening and may heal without treatment. If you use surgery, radiation, and chemo and still survive, you are a success. This is true even if those treatments didn't contribute to your survival.

One example is ductal carcinoma in situ (DCIS), also known as stage 0 breast cancer. It accounts for 20 to 30​% of all breast cancer diagnoses.

This cancer has almost a 100% 10-year survival rate. About 20 to 30 out of every 100 breast cancer patients also get a false diagnosis. They then get treated for something that isn't cancer.​ ​Cancer screenings also don't decrease cancer deaths.

Just like lead-time bias, overdiagnosis bias has made vast improvements in five-year survival rates. But the cancer death rate has not improved in 60 years.

The cancer industry uses bogus ​five-year survival rates to fake the reduction in cancer deaths. They need to mislead us, so we don't know that they're not curing most cancers. 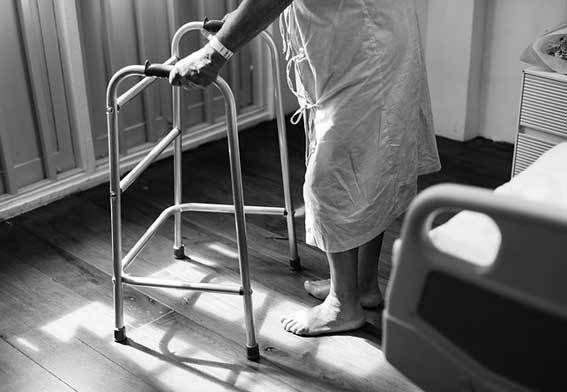 The industry finds and treats cancers that would never have been life-threatening. At the same time, they fail to cure serious cancers. There is no correlation between increased cancer survival rates and decreased death.

That's why these statistics are meaningless when it comes to screenings. Even if these stats are fake, they are still used to promote screenings.

We're told that if you catch cancer early, you have a bigger chance of surviving. But all it does is to create more cancer patients that the industry can treat. One such method is mammography.

​Mammograms May Cause More Cancer

Mammography screening is one of the greatest controversies in healthcare. The harms are much bigger than the benefits. 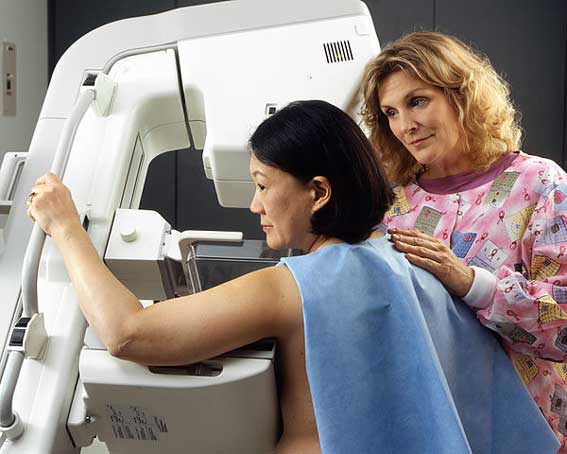 Mammograms and x-rays can cause more cancer

​Learn ​more about the harmful effects of mammograms. Click here to read more.

This amounts to more than 150 times the amount of radiation than a single chest x-ray. Smashing the breasts between two plates can damage small blood vessels. This can result in existing cancerous cells spreading to other areas of the body.

​Another disappointment of mammograms are the frequent false positives

​Dense Breasts And Premenopausal Women Lead To Many False Positives

If a mammogram detects an abnormal spot in your breast, the next step is often a biopsy. This involves taking a small amount of tissue from your breast. The sample is then looked at by a pathologist under a microscope to determine if cancer is present. 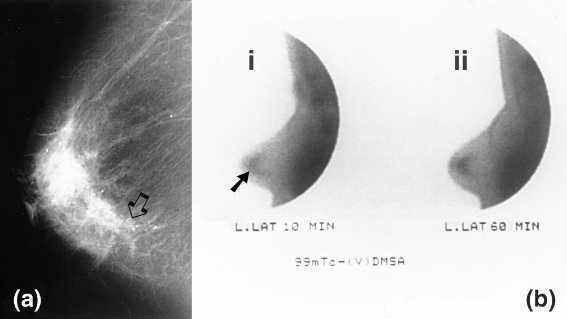 In September 2012, the New England Journal of Medicine published a study about mammograms. They wanted to examine the effectiveness of this treatment.

​Find out the emotional cause of breast cancer in this blog post.

They estimated that in 2008, 70 000 cases led to overdiagnosis. This accounted for 31% of all breast cancers diagnosed. They concluded that screenings had at best, only a small effect on the breast cancer death rate.

​Thinking you may have breast cancer focuses your mind on fear and disease. It is well established that stress has damaging effects on your health. So, a false positive diagnosis can be damaging to your health.

​​​Even if mammograms detect cancer, the procedures used to treat it are deadly.

​Mammograms ​are not only ​unsafe, but they are not saving women's lives. Even if mammograms are successful at finding cancer ​they won’t prevent cancer deaths.

Why? Because they will use chemo, radiation or surgery to defeat cancer. All these methods don’t remove the underlying cause of cancer. 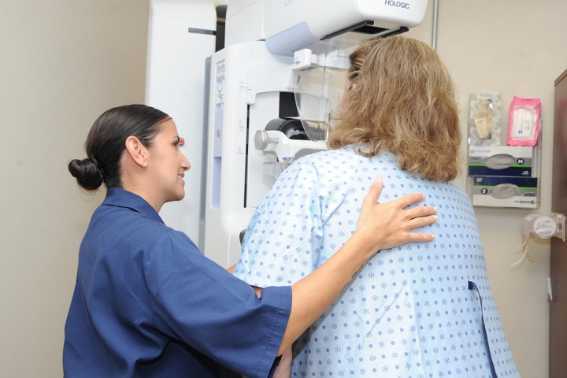 ​If mammograms find cancer, the next step is to use toxic cancer treatments that cause more cancer

​Chemo​ only prevents death by cancer in 2% of the cases. Radiation is also toxic and may cause more cancer. Surgery is useless if cancer spreads to other parts of the body. Even if you catch cancer early, surgery only treats the symptoms of the tumor.

Learn why you should avoid chemotherapy treatments. Click here to read more.

​If you don't address the causes of cancer, it may come back. Women who remove their breast don’t increase their chance of surviving from cancer.

Prostate cancer screenings do not save lives either. They do more harm than good. The most common way to test for prostate cancer is the PSA test.

This test measures the amount of prostate-specific antigen (PSA) in your blood. PSA is a protein produced by both cancerous and non-cancerous tissue in the prostate. 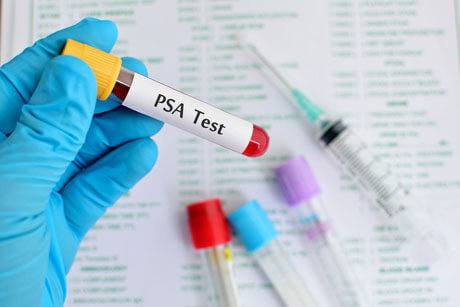 PSA testing yields many false positives. It contributes to over one million prostate biopsies a year. Levels are often higher in men that have prostate cancer. But other things, such as urine infections, also raise PSA.

PSA levels don't tell how fast your cancer is growing or if it will cause problems. The prostate gland may also expand as men get older, even if there are no cancerous cells. Benign prostate enlargement can also raise PSA levels.

​Early detection of prostate cancer does not save lives.

A study in the UK followed more than 400 000 men aged 50 to 69 for about ten years. One group got a PSA test. ​The control group were not offered screening tests but were able to request a PSA if they wanted one.

Men with possible prostate cancer then had a biopsy, and those found to have cancer got treatment. There was no difference in prostate cancer deaths between the two groups after ten years. 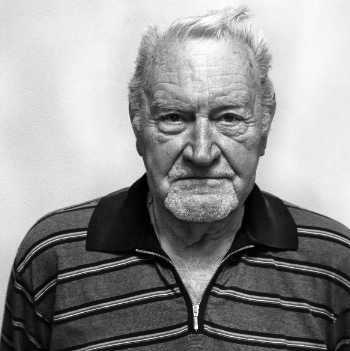 ​Discover the emotional cause of prostate cancer. Click here to ​find out more.

Some men died of biopsy or prostate cancer treatments. Prostate biopsies cause serious harms, including admission to hospital and death. Men diagnosed with prostate cancer are more likely to have a heart attack or commit suicide.

Or they may die of complications of cancer treatments. Prostate cancer treatments also cause erection problems and urinary incontinence. PSA, and mammograms are part of the cancer sales funnel

The whole cancer industry wants to make as much money as possible. It's one of the biggest scams on earth. Cancer screenings don't exist to save people from cancer, but to create new customers.

All cancer charities are part of what I call the Cancer Sales Funnel. Good marketers know that you need future customers to consume their information. Once you get their attention, you then try to make them buy your products. 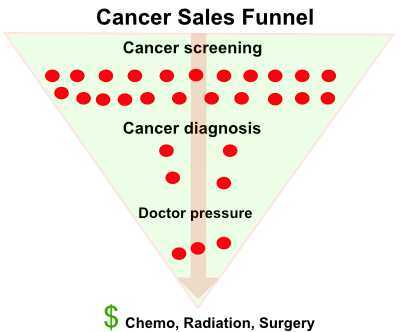 The cancer industry uses screenings to lure people in and sell their treatments. Doctors then bully patients to get further treatments. The key to making people take action is to paint cancer as a horrible disease.

Doctors have to convince them that their cancer will kill them if they don't do something right away. If that doesn't work, they tell the patients the great survival rate of their treatments. But as you should know by now, these five-year statistics are fake and misleading.

​Increased survival rates have to do with statistical biases instead of effective treatments. If you want to stop cancer, screenings won't help. Instead, you need to learn what causes cancer and change your bad habits. Scroll down to the last section of this blog post if you want to learn how to prevent it.

​How To Prevent Cancer Deaths

​3. ​Learn how to prevent cancer naturally

​Want to do a cancer screening test? Think again! You will not decrease your cancer death rate by finding cancer early. If doctors detect cancer, they will force you to do ​chemo, radiation, and surgery. These methods will not heal you from cancer but make things worse.

If you want to prevent cancer, you need to stop going to your early cancer checkup. You should also avoid chemo, radiation, and surgery.

A far better way to stop cancer is to understand what it is and change your health habits. There are many ways you can prevent cancer by using natural remedies. Download our free guide below to learn 9 things you can do to prevent cancer naturally.

​​​Download this ​free ​cheat sheet to learn 9 ​ways you can use to prevent cancer. Discover what causes cancer and what to do about it.

​Yes, ​I want to prevent cancer

​Icons made by Freepik, ​Eucalyp