​What are chemtrails that we hear people talk about? Learn why chemtrails are a threat to our health and environment.​ Discover who is behind them and what their hidden agenda is. And ​find out how we can stop this evil practice now. ​

Quick Navigation
What Are Chemtrails?
1. ​What Are ​The Trails In The Sky?
Chemtrails Are Not Contrails
​The Devastating Side Effects Of Chemtrails
2. ​Who Is Spraying Our Skies?
​Follow The Money Trail
​Elite Bankers Control Our World
The Elite Wants To Create A New World Order
​Chemtrails Are Part Of Weather Manipulation
​HAARP Can Cause Natural Disasters
​​Eugenics: The Elite's Way To Kill Us All
GMOs Destroy Independent Farming And Cause Cancer
Summary
​How We Can Stop Chemtrails
Action Steps

Did you know that airplanes spray tons of heavy metals in the sky every day? If we want to save our planet, then we need to stop the spraying now!

In this ​blog post, you're going to learn what chemtrails are and why they are a threat to our health.Then you are going to discover who is behind them and what their hidden agenda is.

And finally, you're going to find out how we can stop this evil practice now. So let's start.

If you look up in the sky, you might see the trails airplanes leave behind. We call them condensation trails or contrails.

Jet engines spew out hot, humid air in the cold atmosphere. This process causes condensation that crystallizes into ice. The ice crystals are the clouds that we see forming behind the engine.

Contrails usually dissipate within seconds. But lately, these trails have started to linger much longer in the sky than before. They can stay in the sky for hours and create a fog that blocks the sun. 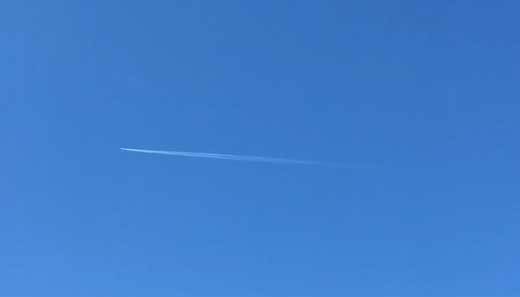 Turbojets and low-bypass turbofans are the only engines capable of producing contrails.But most commercial jets or military planes today don’t use them anymore.

These trails are not contrails, but chemtrails.

Chemtrails Are Not Contrails

The term “chemtrails” is a contraction of chemical trails. Chemtrails differ from contrails. They're geo-engineered aerosols that contain toxic chemicals.

White streaks often crisscross the sky as aircraft fly back and forth. Chemtrails started to show up over North America in the late 1990s. And now you can see them all around the world. 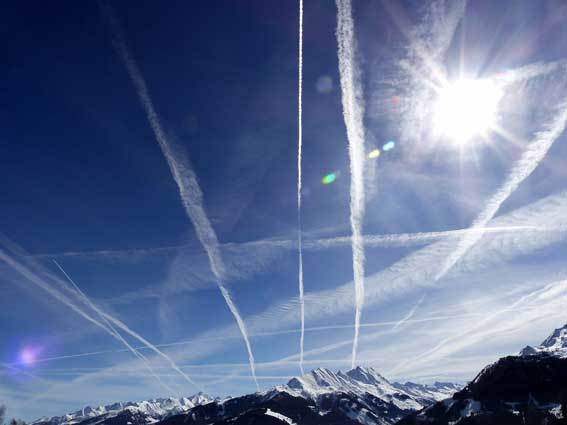 Chemtrails crisscross the sky and create a haze

Chemtrails have nothing to do with the jet engine combustion process. Water samples of areas affected by chemtrails contain alarming levels of heavy metals. Dangerous metals found are aluminum, strontium, barium, and thorium.

​The Devastating Side Effects Of Chemtrails 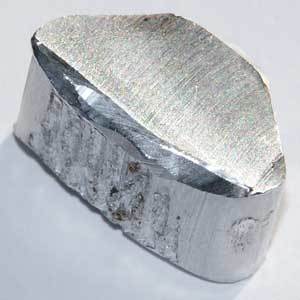 Thorium is a known cause of cancer and leukemia. Aluminum can cause Alzheimer’s disease and damage to the immune system.

Nanoparticles from chemtrails are the real cause of Morgellons disease. Morgellons involves colored fibers growing inside the body.

So who is spraying our skies?

2. ​Who Is Spraying Our Skies?

Government agencies flat out deny that chemtrails exist. If you google chemtrails, you’ll find many sites that tell you that they are nothing but contrails.

But in one document the United States Government admits the existence of chemtrails. And there are also several patents relating to chemtrails and geoengineering.

Government disinformation artists and the media join forces to dismiss chemtrails. Those who want to speak out about chemtrails and the global warming hoax get silenced. 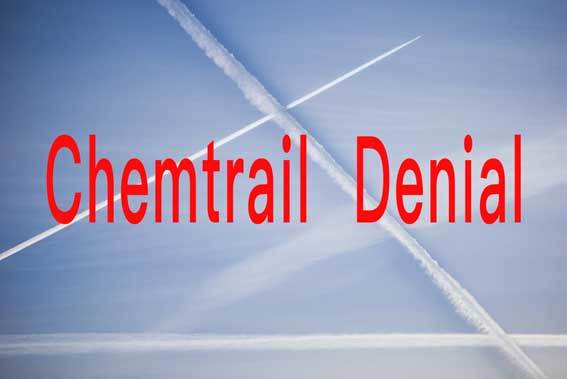 The Government and the media deny that chemtrails exist

They retracted J. Marvin Herndon's article in the International Journal of Environmental Research. He researched chemtrails and concluded that they contained ‘coal fly ash.’

​Find out more about Agenda 21 and the global warming hoax.

So why would the government spray its citizens? In what way would they benefit by destroying the environment? To fully grasp this, you have to follow the money trail.

It is not the government that controls the world, but an elite group of people. If you follow the money, it takes you up the levels of a pyramid. At the bottom of this pyramid is ordinary people like you and me.

Above us is the government. They control us by force and use it to tax us whether we agree or not. At the next level are the corporations. They control the world’s resources and markets with the help of money. 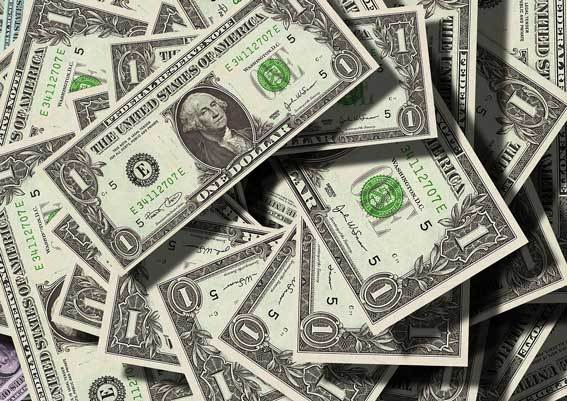 Our monetary system is extremely corrupt

Big banks loan money to them at special rates. Those who control the major banks, rule over the corporations. Above the banks are national central banks, then international banks.

At the top is the Bank for international settlements. So who controls the bank, is it the government? You would think so, but our central banks are privately owned.

Elite families like The Rothschilds, Rockefellers, and others still control it today.Central Banks are banking cartels, which control the governments of the world. These elite families use this scheme to bail themselves out at our expense.

Under this system, we become debt slaves to a ruling class of financial elite.They decide if people eat, who’s a billionaire and who lives on less than a dollar a day. 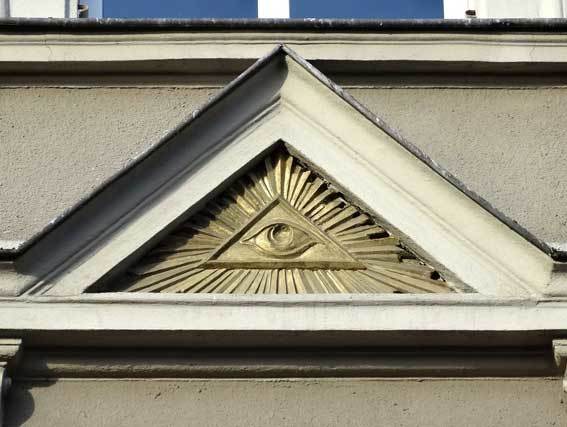 A few families control our world

​Discover why there is no cure for cancer. Read more here.

They already have vast fortunes, so what is their ultimate goal? The secret agenda of the banking elite is nothing less than total global domination. What they want to create is a “New World Order.”

The Elite Wants To Create A New World Order

It is a world where the tiny elite has all the power and make all the rules. So what do they need to rule over the world? 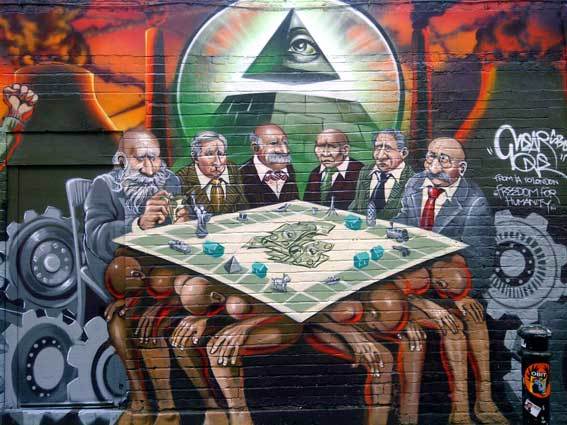 The elite bankers want to create a new world order

They’ve also managed to hijack our medical system.The last thing they need to control is big agriculture and world trade. So this leads me back to chemtrails and the purpose of this program.

​Chemtrails Are Part Of Weather Manipulation

There are several reasons the elite uses chemtrails. First, they spray our soils with toxins to prevent us from growing vegetables.They do this to break our independence.

Another function of chemtrails is to aid the weather manipulation technique called HAARP. HAARP is an atmospheric heater.This technology bounces high-power radio waves off the ionosphere and back to earth. 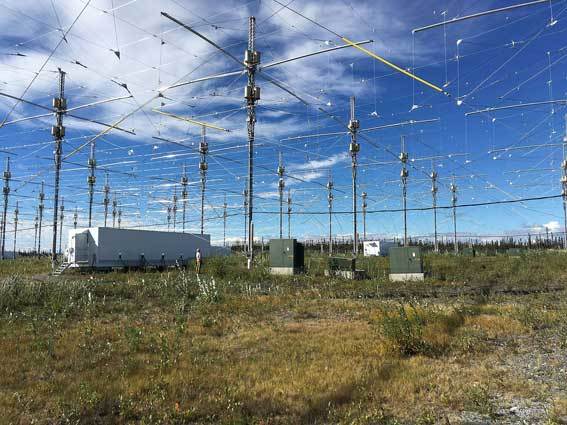 Chemtrails make the air highly-charged and electrically-conductive. HAARP technology took ideas from the work of Nikola Tesla. Weather modification, or ‘geoengineering’ started in the first half of the 20th century.

A NASA document from 1966 confirms the United States geoengineering program. HAARP has the capability for everything from weather manipulation, mind control and more.

​HAARP Can Cause Natural Disasters

Countries can be ‘regime-changed’ or taken over after major earthquakes.The US government used HAARP to create an earthquake in Haiti to steal their resources. 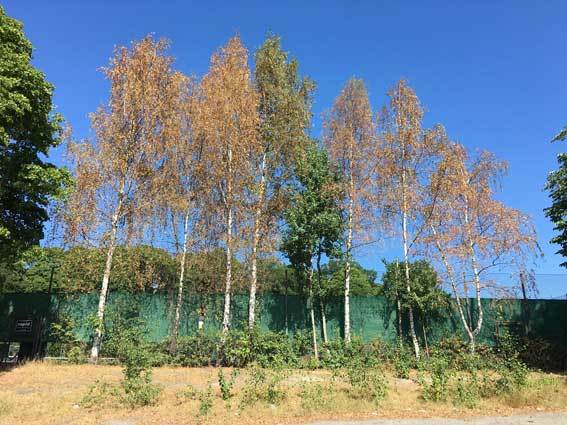 HAARP can cause droughts or flooding

Small independent farming collapses because of the extremes of weather. That is the reason why we see so much flooding, droughts, hurricanes, and earthquakes.

The elite wants you to think it’s all ‘natural’ so they can steal our land. Another plan of the ruling elite is to eliminate the majority of the world’s population.

​​Eugenics: The Elite's Way To Kill Us All

Eugenics is one of the core pillars of their plan. It is the practice where they decide who is worthy to live or not. Sterilization is one of the many evil ways they want to kill us. 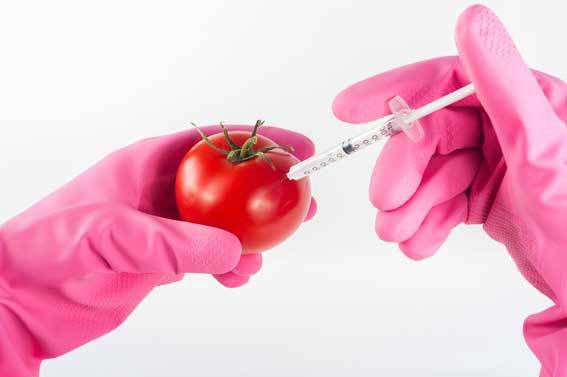 Another way they try to wipe out the population is by using GMOs. Biotech companies like Monsanto want to impose GMOs on us. According to Monsanto GMOs are the solution to world hunger.

GMOs became popular in the American diet in the 1990s. They destroy our digestive system and cause allergies.Monsanto's bestseller herbicide Roundup is a health hazard.

The World Health Organization warned that glyphosate in Roundup might cause cancer. We spray this on crops, in streets, parks, schools and other public places.

Another use of GMOs is to destroy independent farming and take control of all food. The goal of this elite is to replace all crops with GMOs. Monsanto can patent seeds and own the rights to all vegetables.

​Learn more about the nasty chemicals in our food. Click to read more.

They also have plants that can withstand aluminum, droughts, and floods. By manipulating the weather, they can stop their competition. In that way, farmers have to either sell their land or use GMOs. 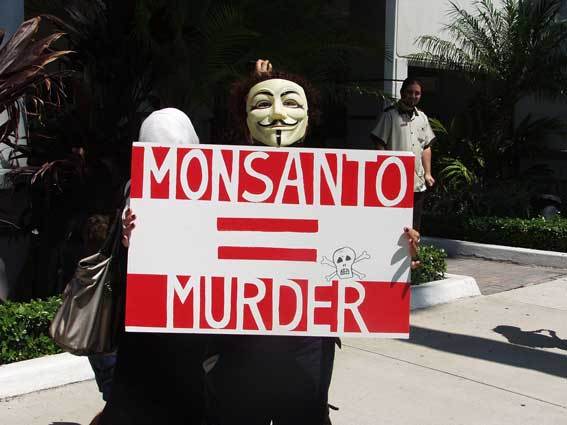 GMOs kill us and independent farming

Farmers commit suicide in India about every half an hour because of failing GMO crops. Monsanto GMO terminator seeds last for only one season and then the farmer has to rebuy them.

Before that, they could reuse seeds for free. If we let this continue, we will end up eating nutritionally deficient foods that cause cancer. So what can we do to stop all this? Learn more further down.

They are dangerous to our health and environment.

Elite bankers use chemtrails to destroy the soil and manipulate the weather.

They want to control the world and our food supply.

We need to stop the spraying now if we want to save our planet!

​How We Can Stop Chemtrails

​1. ​Take pictures or videos of chemtrails

​3. ​Use the app every time use see a chemtrail

​4. ​Add the info from the app in our document

It’s vital that we humans start to expose the ruling elite and their plan to destroy and control our food supply. Look for planes that spray the sky and take pictures or videos of them.

Airplanes that spray these toxins are either military planes or commercial jetliners. I’ve used the app flightradar24 to track different planes in the sky. You can download this app to your iPhone or Android phone.

This app tracks all airplanes in the sky. If you see a plane that sprays the air then press the AR symbol in the upper left corner of this app. This button will take you to a virtual camera view and show you info about the airplane.

If the app doesn’t show anything, then it's probably a military plane. Use this app every time you see a chemtrail and post the info in this document.

Add as much info you can about the airplane, place, time, and more. Tell your friends and families to do the same and let's make this database grow further.

​Phantom Self: (And How to Find the Real One),
by David Icke

​THRIVE: What On Earth Will It Take?

About the Author Simon Persson